What if Swai Fish Have Fins and Scales?

With the growing confusion regarding Swai and its use, one question is: Does Swai fish have fins and scales?

To answer the question quickly, Swai fish comes from the family of catfish, and like most catfish, Swai does not have any scales.
However, Swai does have fins that resemble the fins of a shark, due to which it’s often referred to as an iridescent shark catfish.

The answer to these questions leads to more confusing questions, like:

So in this article, you will find answers to all the confusing questions regarding Swai fish and its appearance.

But before that, let us answer the two most asked questions:

Does Swai have fins? 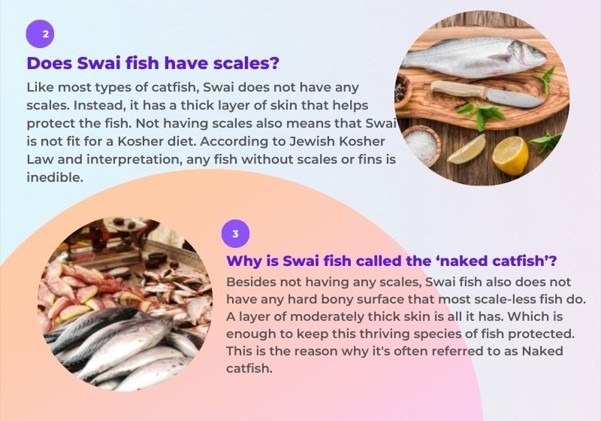 Does Swai fish have scales?

Like most types of catfish, Swai does not have any scales. Instead, it has a thick layer of skin that helps protect the fish.
Not having scales also means that Swai is not fit for a Kosher diet. According to Jewish Kosher Law and interpretation, any fish without scales or fins is inedible. While there are many different scales, any scale that is not visible to the naked eye or is too deeply embedded in the skin is considered non-Kosher. Fishes with scales that can be easily seen and removed without defecting the fish’s skin are deemed fit for Kosher.

Swai is a freshwater fish that goes by many names, including Tra, Iridescent Shark catfish, and Striped Pangasius. It is closely related to the catfish family and also tastes quite similar. However, it has its unique features.

Distinct Physical features of the Swai fish as attested by the Food and Agriculture Organization of the United Nations.

Swai grows well up to 130 cm and often over 40 kgs.
The male species of Swai are more streamlined in shape, while the females have noticeably wider bodies.
Like most catfish, they don’t have scaly skin. Instead, their skin is smooth and gray. 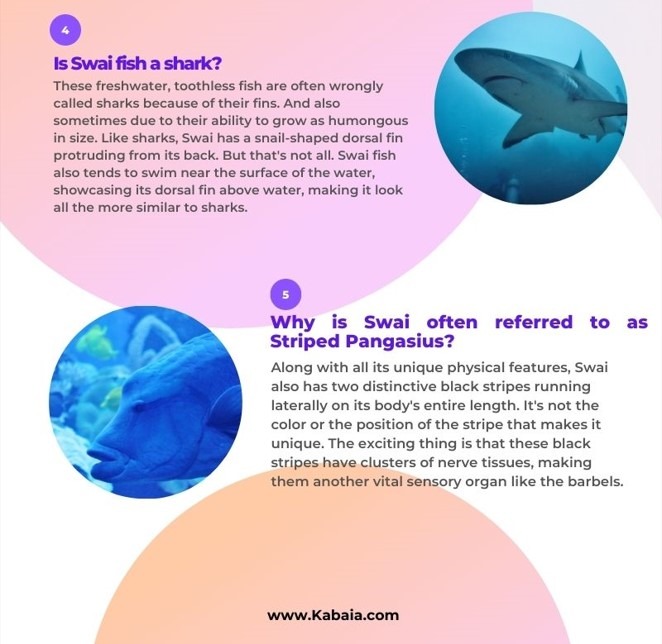 However, they are born with more shiny skin. Juvenile Swai fish have an iridescent skin color with dark-colored fins, which is why they are termed Iridescent shark catfish. This makes them famous for showcasing in aquariums as the ends of their fins glow in the water.
But as they grow into adults, their skins develop a particular coat of matte gray, sometimes even dark gray, with no iridescence.

Swai fish also has a pair of barbels beneath its mouth. Barbels are a distinct feature of catfish. They are thin whiskers like tendrils around the mouth. They serve as a sensory organ, helping the fish move and detect prey in opaque waters.

Why is Swai fish called the ‘naked catfish’?

Besides not having any scales, Swai fish also does not have any hard bony surface that most scale-less fish do. A layer of moderately thick skin is all it has. Which is enough to keep this thriving species of fish protected. This is the reason why it’s often referred to as Naked catfish.

You may also like: Swai Fish vs Catfish? Here are the 5 Health Facts Every Savvy Eater Must Know!

Is Swai fish a shark?

These freshwater, toothless fish are often wrongly called sharks because of their fins. And also sometimes due to their ability to grow as humongous in size.
Like sharks, Swai has a snail-shaped dorsal fin protruding from its back. But that’s not all. Swai fish also tends to swim near the surface of the water, showcasing its dorsal fin above water, making it look all the more similar to sharks.

But this is the closest it comes to being a shark.
The actual purpose of the dorsal fin is to help them move quickly through the fast-flowing waters of the Mekong river.
The dorsal fins can be cleverly repositioned depending on which swimming style the Swai fish have adopted and whether they are moving upstream or downstream.

Another reason for calling Swai a shark may be a possible smear campaign. Since the beginning, Swai has had to face the wrath of different campaigns, to learn more about those campaigns, see also Where does Swai fish come from? Its Odd History and Origins
Likewise, swai fish may be subjected to being called a shark, to purposefully lure consumers into thinking Swai is unsafe to eat. As approved by research, sharks have a high mercury content and are deemed dangerous to consume. Calling Swai a shark would make consumers assume the same.

To avoid any doubt, the Swai fish is an omnivore fish and thrives on whatever plant or animal material comes its way. However, it does not attack large prey like the shark. And has low mercury content as approved by the FDA and other state researchers.

Why is Swai often referred to as Striped Pangasius?

Along with all its unique physical features, Swai also has two distinctive black stripes running laterally on its body’s entire length. It’s not the color or the position of the stripe that makes it unique. The exciting thing is that these black stripes have clusters of nerve tissues, making them another vital sensory organ like the barbels. Scientists have long been amazed by this phenomenon and after thorough research, it is suggested that this organ helps the fish determine water changes and quickly regulate and adapt to it.

While there is still much confusion regarding Swai fish, we hope we have helped clear the significant confusion and clearly answered the question Does Swai fish have fins and fish scales? In case there is anything more you need to know about Swai fish, feel free to comment below or contact us here

Swai VS Basa: Here Are 2 Remarkable Similarities To Note

Where does Swai Fish come from? Its Odd History and Origin

5 steps To Preserve, Process and Pack Smoked CatfishSwai fish vs Tilapia: 4 Interesting Things that May Shock YouIs Catfish A Good Fish To Eat? 12 Popular Myths Busted!Top 5 Health Benefits Of Smoked Catfish To Keep You Guessing!
We use cookies to ensure that we give you the best experience on our website.
← Back to login
Thanks for subscribing!